What is Diabetes and How can we Fight it? The 14th of November is World Diabetes Day, a great occasion for us to learn more about this disease that is affecting more and more people worldwide.

Diabetes is a chronic disease that develops when our body, through the pancreas, does not produce enough insulin or can’t respond to it appropriately, leading to high levels of sugar in the blood. Originally a disease that only concerned rich countries it is now occurring more frequently in the middle and low-income countries, affecting adults and children indifferently, sparing no country nor social class. Thus, everyone can be affected by this epidemic which now is the concern of 415 million people worldwide, or 1 in 11 adults, making diabetes one of the 5 more common reasons for death.

Diabetes is a major threat to global health and it is important to bring awareness in order to better understand it and tackle it. That’s why in 1991, World Diabetes Day was created, happening since then every 14th of November.

Insulin and types of diabetes

Insulin is a hormone that regulates the metabolism of carbohydrates, fats and protein, by promoting the absorption of carbohydrates, especially glucose, from the blood into liver, fat and skeletal muscle cells. It plays such an important role in regulating sugar in our body that on people that suffer from diabetes and the pancreas is not able to produce any insulin or make proper use of it, it will lead to a rise in glucose levels in blood, called hyperglycemia, which can lead to many health problems that are explained later in the article.

Previously known as insulin-dependent, juvenile or childhood-onset because it affects children and adolescents more frequently, it can be developed at any age. It is an autoimmune disease, as the body makes none or a very small amount of insulin, due to the immune system attacking and destroying the cells in the pancreas that produce it. So far, the causes for its appearance are still unclear and it can’t be prevented, but certain tendencies to genetic and environmental factors have been observed.

The most common one with 90% of all cases, formerly called non-insulin-dependent or adult-onset, is observed when the body doesn’t properly use insulin. Contrary to type 1diabetes it is not an autoimmune disease, meaning that the reason for its appearance, even in unknown cases, tends to be more related to genetics and a combination of an unhealthy lifestyle (like not exercising and being overweight).

Developed by pregnant women, it's hyperglycemia is where blood glucose values are above normal but below those of diabetes diagnostics. Generally, it goes away with the delivery of the baby, although it sometimes leads to type 2 diabetes afterward. Its cause is the appearance of insulin-blocking hormones produced during pregnancy along with lifestyle factors.

Apart from these more common types of diabetes, other rare types exist due to other causes like drug or chemical-induced diabetes.

You can see the different symptoms of diabetes in the graph below: 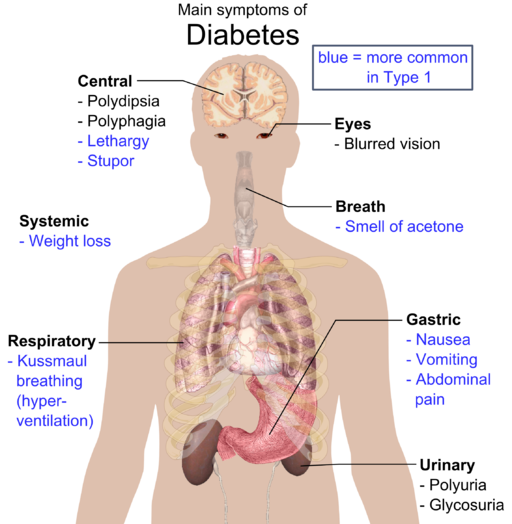 People suffering from diabetes have an increased risk as well to develop other complications due to their level of glucose in the blood. The more frequent are:

After the diagnosis of diabetes, which generally occurs with a blood sugar test, and the confirmation of what type is the patient suffering treatment will be started by the doctor. For type 1, the most common treatment is the prescription of an insulin injection as well as some physical activity. For people suffering from type 2, weight reduction is necessary with a combination of a specific diet with an exercise program, with diabetes medication sometimes prescribed, prescribing insulin if and when the medications turn out ineffective. Patients suffering from gestational diabetes will be treated by insulin during their pregnancy.

If all medical recommendations are followed, it should result not only in the reduction of glucose in the blood but as well, especially in type 2 diabetes patients, drastic changes in their lifestyle.

The International Diabetes Foundation gives 9 recommendations for a healthy diet, lowering the chances of diabetes: 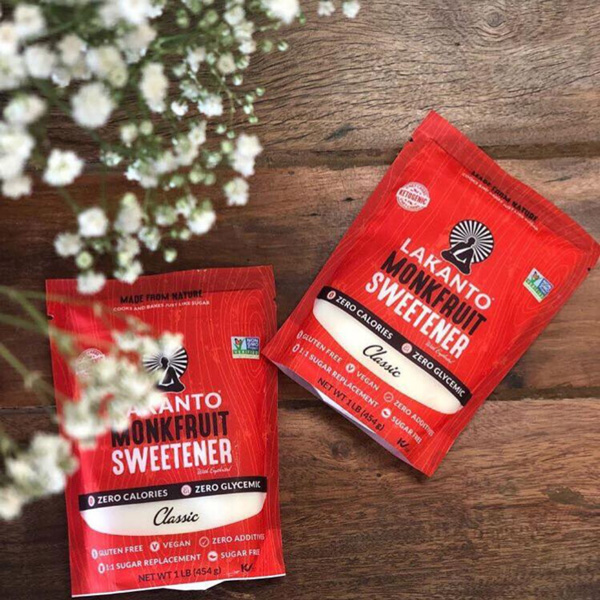 For people suffering from diabetes type 2, it’s appearance could be prevented or delayed by:

Now that you are well-informed, you are ready to participate at the World Diabetes Day, changing your life for the better as well as bringing awareness about this disease, helping people to take care of their health.