Extract of our conversations with Dr. Taro Furuta, former head of Saraya Biochemical Laboratory, about the start of Alsoft (Hibiscohol in Japan), our long seller hand sanitizer.

Saraya as a company has been developing hand soaps and detergents since its inception but in order to grow their line of products to offer more hygiene solutions their next natural step was to develop a hand sanitizer, an alcohol solution which would let you sanitize your hands without the need of water.

Handsanitor, Saraya’s first-hand sanitizer, came out in 1977, but it needed to be upgraded to a more effective sanitizer containing more alcohol. The problem with this is that alcohol damages the skin. How can we create an alcohol-based hand sanitizer without damaging skin? The project started with just two researchers, Dr. Taro Furuta, known as Saraya’s Dr. Handwashing, and Dr. Koji Kihara, now a General Manager at the Global Operations Division Sales & Marketing Dept.

There were two main hurdles to overcome.

The first one was to find the right disinfectant to enhance the disinfecting power. They started looking for a disinfectant to strengthen the sanitizing effect, with 2 kinds already in their mind, chlorhexidine and benzalkonium chloride, popular in Japan. After researching and consulting with dermatologists, they chose chlorhexidine gluconate from the viewpoint of skin safety. Succeeding in creating 2 new synthesized chemicals with the help of Osaka University, efficacy was confirmed through experimentation.

The second was to find the right emollient to protect the user’s hands without reducing disinfecting power. This wasn’t as easy as selecting the right disinfectant because there are countless emollients. They began analyzing theses written by researchers, one day coming across a thesis about a Skin Feel Index written about 20 years before, which listed the effect of emollients on the skin surface. The authors tried to use the ratio of both the Initial Slip (how you feel on your skin when you put it on) and the End Feel (how you feel in the end) as the Skin Feel Index, expressed as the sum of four factors: smoothness, friction, oiliness, and wetness, each rated on a five-point scale.

With about 100 emollients on their list to experiment, Dr. Furuta and Dr. Kihara searched for available materials, such as cosmetic ingredients, and kept experimenting one by one, day after day. One day, they came across an emollient that did not reduce the disinfecting efficacy, but on the contrary, it enhanced efficacy! It turned out to be a material that was already being used in cosmetics, although not as a moisturizer, but as a fragrance excipient, which is a substance to stabilize fragrance. This process took them about 1 year of research plus six extra months to come up with the right formula through stability tests. 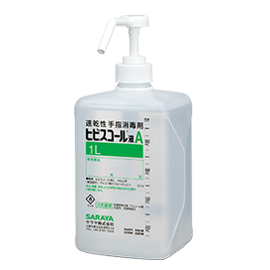 It was in 1986 when they finally filed it as an ethical drug product as well as a pharmaceutical additive to the Ministry of Health in Japan. It was the company’s first patented product both in Japan and in the USA. The patent was obtained in 1988 and the Ministry of Health granted the production permission in 1989, beginning production in 1990 under the name Hibiscohol (Alsoft in other countries). Their thesis was published in an academic journal in Japan as well. 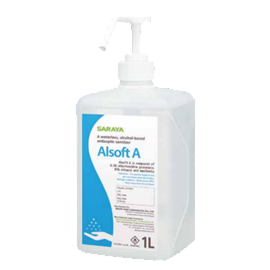 First released as a drug for medical use in the healthcare industry, when the devastating Tohoku earthquake occurred in 2011 this hand sanitizer came into use by the general public, due to hygiene conditions deteriorated by the lack of clean water during long periods of time. Ten years later, Saraya’s Alsoft is available in many parts of the world helping in the fight against infectious diseases, be it food poisoning, noroviruses, Ebola, or Covid-19.