Preparations to Prevent a Norovirus Outbreak Arimakogen Hospital is located in the Arima Highlands area of Kobe city. Based on its philosophy, 'To provide medical care and welfare services with love, to cooperate in harmony, and to devote ourselves to creative ingenuity', the hospital offers comprehensive psychiatric care and welfare services. Arimakogen's verdant setting, in 130,000 ㎡ of parkland, features not only healthcare facilities, but also a farm and bird sanctuary, offering a calm and healing environment for patients. - What background led you to consider introducing Alsoft V in your facility?

Two years ago, we experienced a month-long outbreak of Norovirus. We devoted a lot of money and effort to contain the outbreak, and the experience made us determined never to repeat the experience.

After the outbreak, we came across Alsoft V at a hospital seminar held by Saraya. Alsoft V was introduced as an alcohol-based hand rub to demonstrate the effectiveness of inactivating the Norovirus. Once we heard of the product, we considered introducing it in our facility and began using it in December 2010.

- Why did you choose Alsoft V?

It was difficult for us to use several alcohol-based hand rub products at the same time, due to pharmaceutical management concerns. For this reason, it was essential that any new product we chose be able to replace the products we formerly used. Saraya staff explained the details of the product to us, and it turned out that Alsoft V covers the antibacterial spectrum of our former product; we also appreciated its demonstrated effectiveness against viruses (including non-enveloped viruses). With this information, we decided to replace our old product and begin using Alsoft V in our facility.

There were two additional reasons that supported our decision. One was the positive effect on skin, since it contains emollients, and the other was the cost, which was similar to our former product.

- Where have you begun using Alsoft V?

In our hospital, Alsoft V are installed at every entrance to all facilities and wards. This helps us to prevent microorganisms, such as Norovirus, from being brought into the facility from outside by our staff and visitors. In addition, on wards with susceptible patients, such as those with dementia, we have also installed Alsoft V at the entrance of every patient's room.

We also have a long-term care facility at our site and have installed Alsoft V at each of its entrances. Further, we have distributed portable Alsoft V bottles to individual staff members, so they can use it frequently at the point of care. This is because Norovirus tends to spread very quickly, once it emerges in a long-term care facility. Currently, we also encourage our staff to use Alsoft V when leaving the facility, so they do not take Norovirus into their homes. 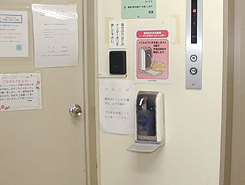 Alsoft V has been installed with a no-touch dispenser (GUD-1000). People can use it to receive a certain amount of Alsoft V simply by placing their hands under the nozzle.

At public entrances, we have posted an instruction panel explaining the hand hygiene procedure, so that everyone can perform effective hand hygiene.

- Did you notice any change after replacing your old product with Alsoft V?

When we made the switch to Alsoft V, we took the opportunity to remind staff of the importance of hand hygiene. This also helped them to become more conscious of their own status as a potential reservoir for the transmission of pathogens. As a result, the hand hygiene compliance rate was significantly improved. The no-touch dispenser is also popular, as it is easy to use. We think this is one of the reasons for the improvement in the compliance rate.

- How did you find the effectiveness of Alsoft V, in terms of preventing another Norovirus outbreak?

Last year, when we started using Alsoft V, we identified several patients colonised by Norovirus, but it did not spread to other wards or cause an outbreak. Two years ago, when we experienced the Norovirus outbreak, three of our eight wards were affected. Only one ward was affected last year.

At the long-term care facility, we used to have many Norovirus infections every year; however, there were only a few identified this year.

- What are your thoughts on the use of an alcohol-based hand rub product in the future?

Last December, we decided to use Alsoft V through this spring, during Norovirus season. Although we have to consider the products we use based on our staff members' opinions, we hope to continue using Alsoft V in the future.

Many patients receive long-term care, and they assumed that most microorganisms affecting them are brought from outside the facility by staff or visitors. With this in mind, Alsoft V was installed at all facility entrances. We were impressed by the staff determined to prevent the intrusion of pathogens from outside. At the same time, various approaches for improving hand hygiene compliance, such as using a no-touch dispenser or portable product, have been implemented. This prepared environment and heightening the staff's consciousness of the importance of hand hygiene could be two of the most important elements in preventing further infections.
8 April 2011 Y. Yoshida, K. Komatsu, H. Imai Academic Department, Medical Division Saraya Co., Ltd.