Hand Washing, Coronavirus and How we Became the First Producers of Alcohol Sanitizer in Uganda How SARAYA started producing alcohol sanitizer in Uganda, how it responded to the Coronavirus, the fight against Ebola, and the future of sanitation in the country.

Extract of AFRICA magazine No60, published by the Africa Society of Japan. Madoka Mori, in charge of African Business Development at SARAYA, talks about how SARAYA started producing alcohol sanitizer in Uganda, how it responded to the Coronavirus, the fight against Ebola, and the future of sanitation in the country.

The global pandemic of the new coronavirus

While the new coronavirus infection is spreading at a very fast rate, the Japanese government had no choice but to declare the state of emergency.

Since our company’s foundation, we have always felt that we have the responsibility to do what we can in order to help stop and prevent infectious diseases. Thus in order to help prevent nosocomial infections in Japan, we have been actively producing alcohol sanitizers. To keep up with the increasing demand, in addition to our newly built factory in the Kanto area, our factories in Osaka and Mie are producing alcohol sanitizers at full capacity.

Looking back at past epidemic outbreaks, the 2003 SARS Coronavirus, the norovirus in 2006, and the H1N1 in 2009 we can see that epidemic outbreaks are actually a regular occurrence. This time the novel coronavirus “Covid-19” has expanded to the world and has been classified as a global pandemic.

In Africa only a few cases were reported earlier this year, however, due to the recent economic growth and the influx of people, the number of cases will probably grow with time.

From my own memory and experience on the field, hospitals in Africa usually lack access to soap and alcohol sanitizers, thus the increase of new cases predicted and depicted in the media might be sadly inevitable. In countries where the healthcare system and medical treatments have flaws, getting infected could be a death sentence.

Becoming the first locally producer of alcohol sanitizer in Uganda

Saraya has been locally producing Alsoft V (alcohol hand sanitizer) in Uganda since 2014.

Uganda, located in east Africa, is a leader in the production of sugarcane in Africa. The molasses extracted after sugarcane is processed can be processed furthermore into ethanol, which is used to produce alcohol sanitizer based on a formulation developed in Japan.

Alsoft V was registered as the first alcohol hand sanitizer produced and sold locally in Uganda and East Africa, manufactured at Saraya Manufacturing (U) Ltd (SMU), and has already passed international standards and acquired the cGMP and the ISO9001 approval.

SMU sales model also features education on hygiene by hygiene instructors., since it is not only about manufacturing and selling our products. We believe in instructing our consumers on the right way of using Alsoft V, with proper education on hygiene as a very important step in the fight against infectious diseases.

There have been outbreaks of Ebola in Uganda, the Democratic Republic of Congo and in South Sudan in the past. Due to their experience with Ebola, health care workers in Uganda understand the importance of alcohol hand sanitizers, however at first, and due to the lack of government funds, the supply and demand chain wasn’t fulfilled and we were not able to deliver Alsoft V where it was most needed. Nosocomial infections deaths were very prominent, so unless health care workers and hygiene instructors raised their voices together to teach the importance of prevention, it would have been near impossible to introduce Alsoft V.

We have been teaching our prevention methods and the one developed by WHO (my 5 moments for hand hygiene) on the field through our hygiene instructors and local health care workers, with positive feedback being sent that by actively making campaigns about prevention an increased demand from the whole country via the government was observed.

It had been 2 years since we started to manufacture Alsoft V in Uganda. However, although there was an increase in demand it was not near enough the amount needed for the prevention of nosocomial infections. Meanwhile in the bordering country, the Democratic Republic of Congo, an Ebola outbreak started in 2019. Due to the outbreak, the Ugandan Ministry of Health took new measures at the border between Uganda and the Democratic Republic of Congo as a preventive measure, making it mandatory to disinfect your hands using Alsoft V when crossing the border.

Alsoft V has since then been used as a tool to prevent infections.

Due to the novel coronavirus pandemic, demand for Alsoft V swiftly increased. In February, JICA Uganda Office ordered and introduced 6000L of Alsoft V in public hospitals, surpassing the amount that has been ordered in the fight against the Ebola virus, displaying an impressive speed on this countermeasure. From then on, the demand for Alsoft V steadily increased, with demand 6 times greater in 2020 than the previous year.

The phone would ring non-stop, and with customers coming directly to the office we quickly ran out of stock.

As demand increased a rise in prices of Alsoft V started to occur in local stores. The price rose to more than 4 times the original price, with Saraya Uganda having to deal with angry and unsatisfied customers. Calls, emails, and even direct confrontation would occur, prompting Saraya Uganda to make an official announcement on March 24, starting a list of official distributors and a statement on how the prices were never altered by us. Right after the announcement, we observed an increase of demand for Alsoft V from consumers, which slowed down after the lockdown had been made official by the government from the end of March.

This experience showed us that Alsoft V was recognized not only by Uganda healthcare workers but also by the local consumers as the leading brand of alcohol sanitizers.

Sadly, although consumer needs had slowed down, problems had arisen on the production side. Buying new parts and importing raw material became harder as the logistic custom system weakened with time. In Africa, the number of local manufacturers is overwhelmingly low and a good percentage of the companies depend on trading and import for most of their material. This made it harder for Saraya Uganda to keep up with the real-time demand of Alsoft V and showed us one of the difficult sides of doing business in Africa.

Due to the pandemic caused by the novel coronavirus, the Ugandan government increased the number of certified alcohol sanitizer manufacturers, which up until now only included 1 competitor for Saraya Uganda to more than 10 different manufacturing companies.

Alsoft V was already renowned in the medical and public health sector, but measures were taken to improve our product competitiveness. Due to the outbreak, counterfeits imitating AlsoftV started to be sold on the market, with their effect on viruses and side effects on humans not even verified. As this could damage our brand, we are working on boosting our product efficiency and keeping the trust we have been building all along with our customers.

Why Uganda in the first place?

Uganda was the first country Saraya started doing business in Africa, now expanded to Kenya, Tunisia, and Egypt as of today.

Saraya was founded in 1952 with the original objective to lessen the spread of dysentery, a disease that was very prevalent in Japan post-war era, achieved with our green colored antibacterial soap and dispensers developed at the time. As our company was founded on the importance of clean hands, for the 60th anniversary of Saraya we wanted to share our knowledge and experience to countries in Africa that still lacked the knowledge and structure at the time.

After talking with Unicef in Japan one of their proposals was Uganda. Located just below the equator with an altitude exceeding 1000m, it is blessed with a mild climate, averaging a temperature of 28 degrees all year long. However the access to clean water is still scarce, thus an easy to use and set handwashing system was needed. This is why the “Wash a Million Hands!” Project was conceived.

We decided to donate 1 percent of our revenues from target product sales to Unicef in Uganda, with the money used to set “Tippy taps” and buy anti-bacterial soaps. However, donating money was not our only target, since the idea of doing business was also a goal. The fact that pushed us to start a business was “Waragi”, a locally produced gin drink highly consumed in the country.  As Saraya hand sanitizers are mostly produced with ethanol, using locally produced ethanol for a new business sounded very appealing.

In 2011 a sales company was launched and from 2012 to 2014, a collaboration with the JICA program BOP was started. The demand for alcohol hand sanitizers, the needed materials, and items was investigated, successfully starting to manufacture Alsoft V locally.

How to create a sustainable  sanitation business in Uganda

With the outbreak of the novel coronavirus infection, we experienced the rise of Saraya’s market value in Uganda. At the same time, due to the enormous increase in competitors, it is also true that future demand forecasts will be harder to determine. 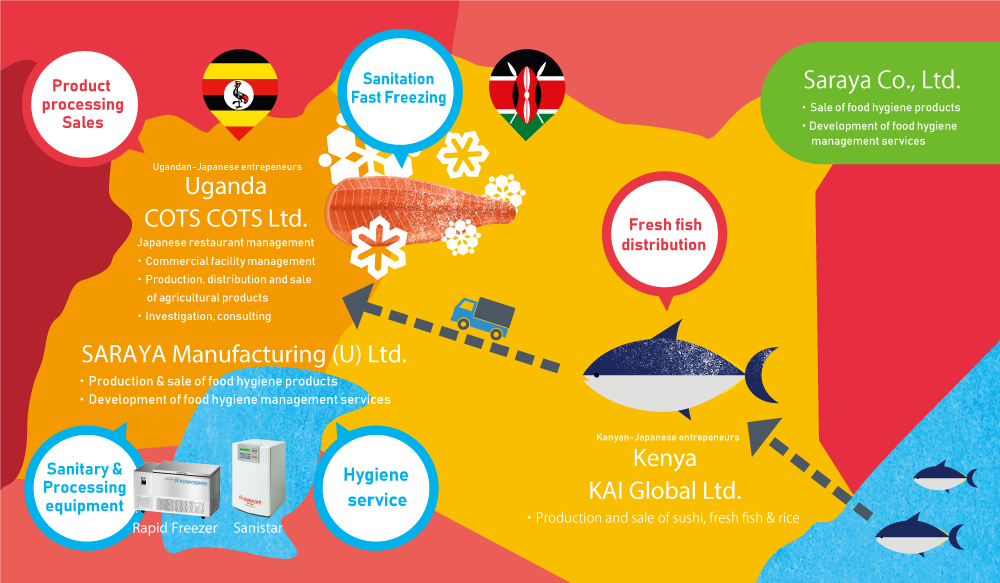 We also started to introduce Lakanto in Kenya. Lakanto is a 0 calorie sweetener and the Kenyan market was chosen due to its rise of diabetes-related diseases. Lakanto is as sweet as white sugar, and can also be cooked with heat.

Establishment of the honorary consulate of Uganda in Japan

Since 2011 Saraya has been working on sanitation projects in Uganda. During the TICAD7 held in Yokohama in 2019, our president Saraya Yusuke met Uganda’s president, Mr. Museveni. During the meeting, the president was notified of all past and present actions we performed in Uganda, which resulted in Mr. Saraya being appointed as the honorary consul of Uganda in Japan.

We will continue to share our corporate philosophy on health, hygiene and environment, expanding our business activities in Uganda.