What are the Sustainable Development goals?

The Sustainable Development Goals (SDGs) are a collection of 17 global goals set by the United Nations in 2015. Also known as the “2030 Agenda”, these goals were created as a universal call to action to end poverty, protect the planet and ensure that all people enjoy peace and prosperity. As Ban Ki-moon, the United Nations Secretary-General from 2007 to 2016, stated: "We don’t have plan B because there is no planet B!."

How is SARAYA helping to reach these goals?

SARAYA is completely committed to achieving these goals.

Since our founding, we have been deeply involved in helping and improving the world we live in. Through the development of antibacterial liquid soap and their dispensers, SARAYA has promoted public health at offices, schools and public facilities since 1952, when post-war sanitation systems were still poor - the same issues that many developing countries such as Sub-Saharan Africa and South Asia are still facing today.

With the implementation of the SDGs in 2015, our company quickly publicly supported the complex yet gratifying mission of creating a better society. Our efforts were quickly recognized when SARAYA won the first SDGs Japan Award in December 2017, promoted by the Japanese Government. The award was presented by Mr. Shinzo Abe, Prime Minister of Japan, and Mr. Taro Kono, Minister of Foreign Affairs of Japan in recognition of our active contributions to the Borneo Conservation Trust in Malaysia and our activities supporting healthcare improvement in Uganda and Kenya to infections in the hospital.

Although they are small steps, our aim is to take concrete and constant steps such as these towards the SDGs. 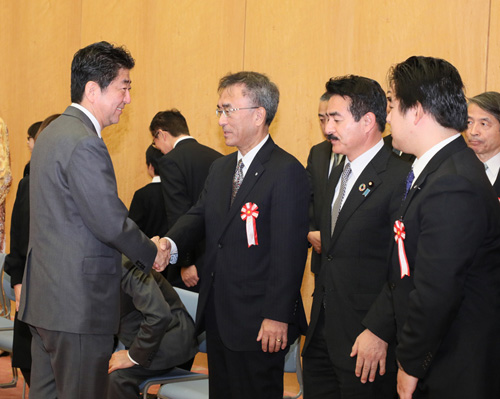 What Goals is SARAYA pursuing?

We are trying to connect with as many SDGs as possible. Currently, we are actively involved in the following 11 goals, but we have plans to include more in the future.

For a more detailed read of our Sustainability Report, click the following link: