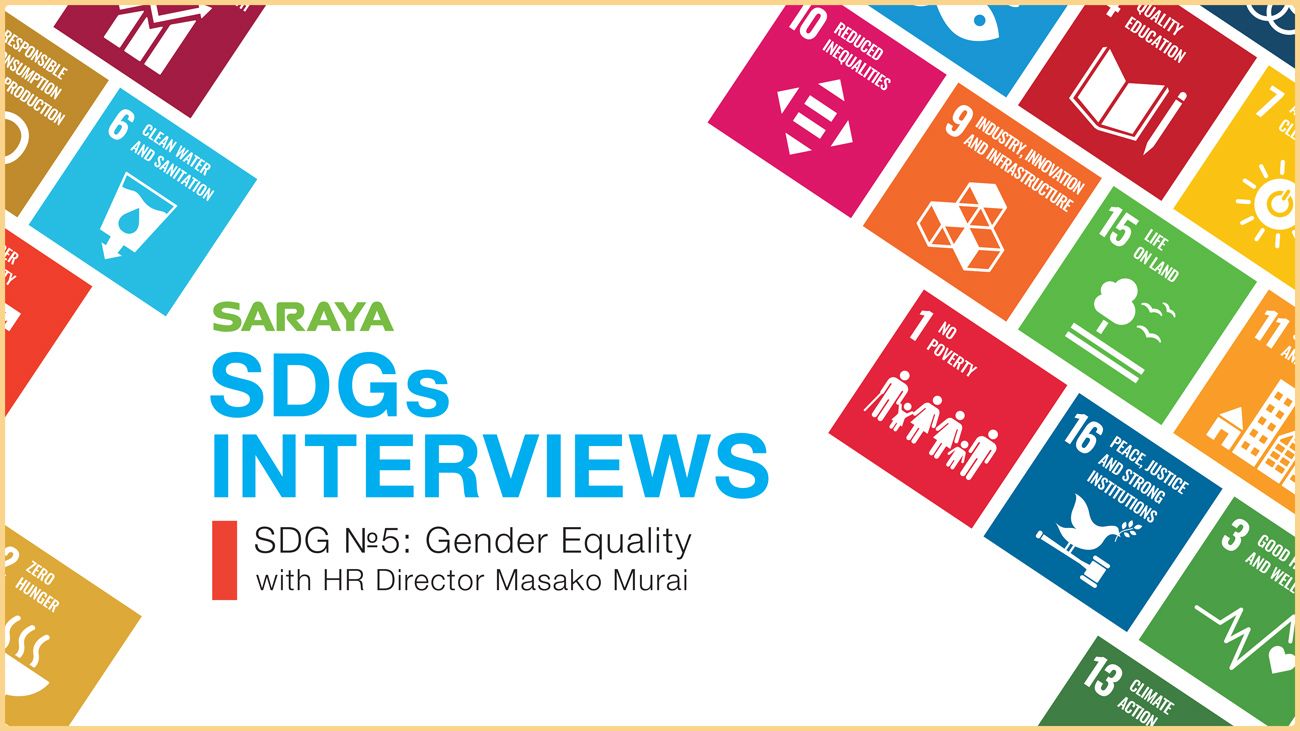 Interview with Masako Murai, Director of General Affairs & Human Resources focusing on gender equality, No. 5 of the Sustainability Development Goals.

SARAYA is one of Japan’s leading companies that implement gender equality, as well as the United Nation’s Sustainable Development Goals (SDGs). This is the first chapter of SARAYA’s SDGs interview series telling the story of those behind SARAYA and how they are working to achieve those goals.

Murai is SARAYA’s current and first female Director of General Affairs and Human Resource as well as one of the two females at the board of directors currently on the company.

Born in a traditional Japanese family, Murai grew up in an environment where girls were often overly protected. Like everyone else at the time, she dreamed of becoming a full-time housewife who could look after her family, so she studied sewing at a junior college to learn the necessary skills to become a perfect housewife. She worked for an apparel company, got married, and like everyone else in Japan, quit her job to become a full-time housewife when she became pregnant.

However, her marriage abruptly ended and Murai had to begin working part-time. At 42, she discovered a job ad for SARAYA, applied, and was hired with an administrative staff position.  Little did she know she would have such a pivotal role with the company’s gender equality movement, becoming one of the first female executives of SARAYA.

How did you come to work with SARAYA?

I started to work for SARAYA as a part-timer. At the time, I just finished a part-time job I worked at for 5 years and found an ad on a free job information magazine at a train station in Tokyo, mentioning a part-time job with an opportunity for a full time one. The phrase “full-time position” spoke to me. I was already 42 years old and I needed some security in my life.

You joined SARAYA in 2002. What did you do before?

After my graduation, I worked with an apparel company for 10 years, but I left the job as I got pregnant, as in those days it was common for Japanese women to leave. The company offered parental leave, but there was hardly anyone who took that leave.

I always dreamed of becoming “a perfect housewife”. To me, it meant a woman who can cook, sew, clean the house and take care of the family perfectly. In order to learn those skills, I studied clothing at Bunka Women’s Junior College in Tokyo, wanting to dress my family in my handmade clothes. I worked hard, but unfortunately, my marriage ended when my youngest son was 4 years old.

My parents welcomed me back home and offered to look after my children so that I could work, which I did as temporary staff at a corporate health management center. There, I saw many female nurses and laboratory technicians working until their retirement. It was eye-opening. I never knew that women could keep their profession like that. Inspired by the way how they balanced their works and home lives, I started to look for a full-time job, which I ended finding at SARAYA.

What was your trajectory in the company?

I started as a part-timer in one of the Tokyo sales offices. My boss told me to do accounting on my first day since an accounting staff abruptly left earlier, so after a 3-day crash course in another department, I started working as such. It was challenging, but I enjoyed learning new things.  Because of that experience, I later was transferred to the Tokyo head office as an accounting staff member. This time again, I had only one week to learn the job. Since then, I worked on salary, health insurance, and sometimes did the hiring. In 2010, I was also appointed, with another female employee, to promote the active participation of women in leadership positions, organizing female leadership seminars and launching management mentorship program.  We also published a weekly “Mind-up, Skill-up Newsletter” to bring more awareness of the active female participation at the management level. There were no female officers by then, but these activities got recognized in both in Tokyo offices as well as Osaka offices gradually and we had the first female executive by 2015.

I like that they let you do things your own way. They encourage a “Let’s Try” spirit. Even if you don’t have much experience, this open environment lets you try new things. I like that people in SARAYA are open to new ideas in this welcoming environment.

SARAYA currently has more female employees and implements gender equality in many ways.  How was the environment for women when you joined the company?

The equal opportunity for women was already in the atmosphere when I joined in 2002, but somehow female employees did not seem to aim higher at that time. Women tended to underestimate themselves, even though they were capable.

What is it like to work for SARAYA as a woman?

I do not want to really emphasize that I am a woman when I am working, but women do have things they could do better in some fields than men. In those fields, I tend to be more active.  I think the best thing is that men and women work in harmony doing what each one is good at.

What is it like to be a female manager in Japan?

I feel lonely sometimes as I am almost always the only woman when I attend executive meetings outside of the company. However, being a female manager brought a change in where I went and who I met. I do love that I get to learn new things and gain new experiences on new levels, also making me think about the company as a whole, not only limited to the job I had in my department.

What is your notion about gender equality?

The high school I went to had a school motto, "Before being a woman, be a human first." It was a girls-only school, though.

When I think about gender equality, I feel that it made my foundation. I believe that it is important to treat everyone equally with dignity as we are all the same "human", regardless of our gender, age or nationality.

Since you have children, how did you manage to balance your work and home lives?

I don’t really recall any hardship since my parents were always very supportive and looked after my children. What I learned from this is ‘time management’. Time is very important to find a balance at work and at home. I learned to appreciate the time with my children as I did not have much time. Also, I always tried to work efficiently so that I could go home early to spend time with them. Raising children is not easy, but it is quite rewarding. I hope our employees enjoy raising their children by all means.

What is your next goal as a director?

SARAYA has been implementing gender equality long before the United Nations started to talk about SDGs. The company stresses on diversity. Gender equality may have more priority at this point, but I hope every employee, no matter how old, where they come from, whether they are handicapped or not, can shine in what they do in SARAYA. We promote each employee’s ‘well-being’, meaning that each one of them realizes and enriches his/her ability and personality as a human being.

What are the next SDG related gender equality goals for SARAYA?

Regarding specific targets, the following numerical targets are set according to the “General Business Owner Action Plan” accompanying the “Act on Promotion of Women's Participation” promoted by the Japanese government.

We would also promote the necessary training and measures to achieve these goals.

What do you like to do in your free time?

I enjoy my life in Osaka, being the first time I have lived all by myself. Osaka is close to ancient cities like Kyoto and Nara, so I visit historic shrines and temples and collect "shuin" stamps whenever I find free time. I also enjoy going to restaurants to taste delicious food here. Many of my friends come and visit and I'll organize short trips for them. It’s like having mini-school field trips.

Could you give a message or advice for young people?

I have been working on gender equality for about 10 years. I know that there are many female colleagues who are still afraid to be promoted in Japan but they shouldn’t. When you get promoted, you'll find different learning experiences around you, which I think you can grow with when you work hard.

Don’t be afraid. When you get an opportunity, be brave and step up to the challenge!