Learn about the Haskap Berry, its health benefits and how our Echo Haskap is grown in our certified-organic farm at British Columbia, Canada.

In the fertile reaches of the northwestern Rocky Mountains, Saraya Natural Products is cultivating an indigo treasure.

This journey is already bearing fruit: just last month, after three years of diligent labour and following very strict rules for organic farming, we reached a major milestone and earned Certified Organic status for the growing operation. Our rigorous certification, provided by the Fraser Valley Organic Producers Association, is compliant with Canadian Organic Standards, as well as ISO 17065 standard and is accepted in the United States, European Union, Japan, Switzerland and Costa Rica. 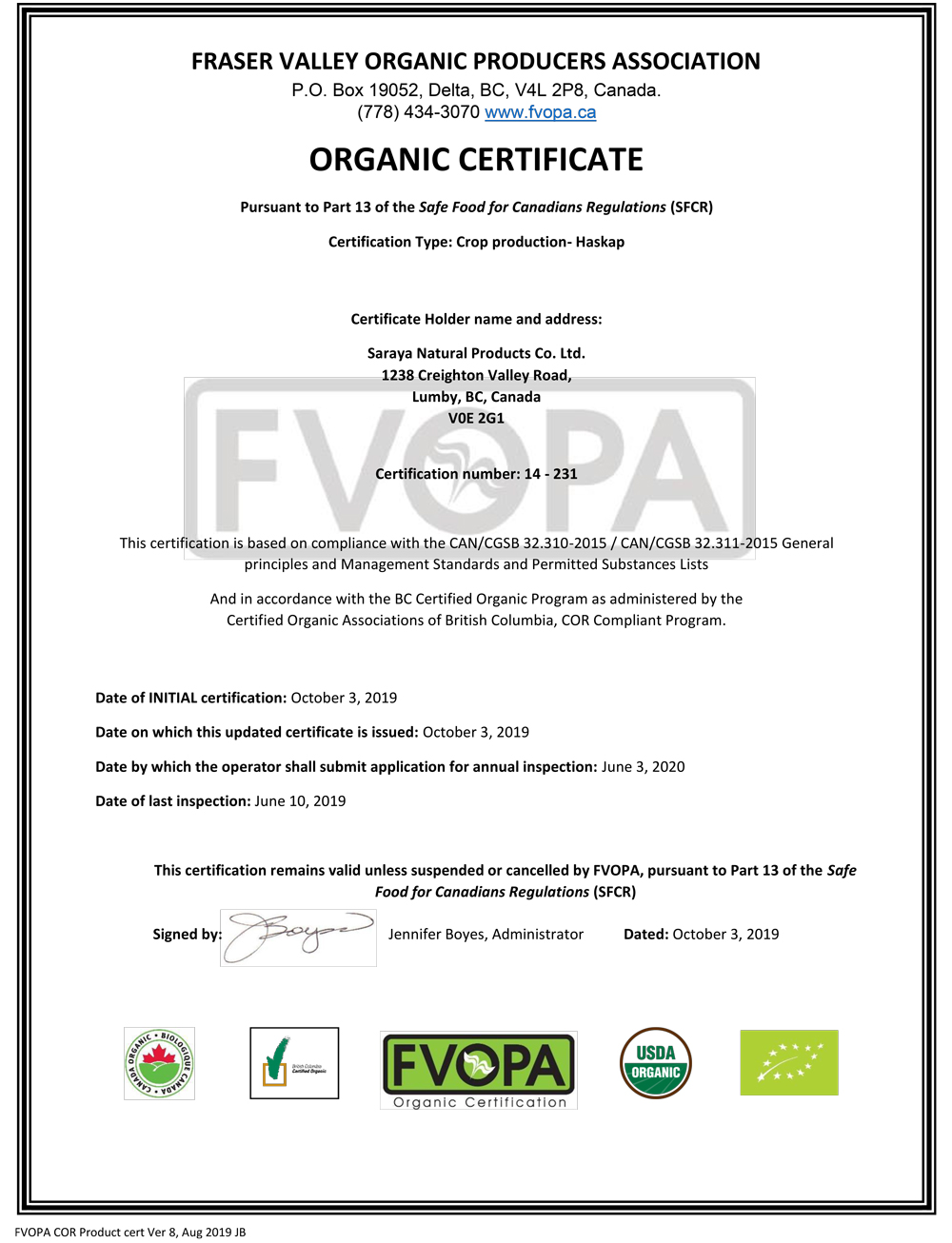 Our philosophy is simple: healthy soil makes healthy berries! Organic farming reflects respect and appreciation for the earth. Savvy shoppers serious about their health and the environment choose certified-organic products, which signal a company’s commitment to ethical and sustainable agriculture. And with a global groundswell of environmental consciousness, the organic market is expected to continue growing, with the US market alone exceeding US$70 billion by 2025. 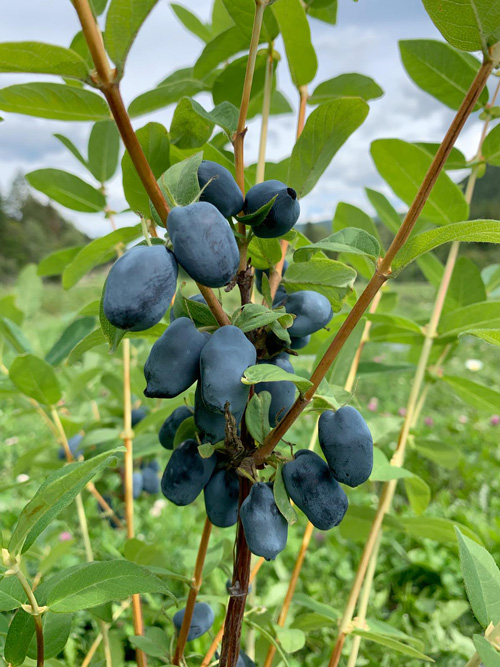 Leading agriculturalists consider Haskap to be a superberry – as it packs more flavour, vitamins and antioxidants than any other commercial berry.

Leading agriculturalists consider Haskap to be a superberry – as it packs more flavour, vitamins and antioxidants than any other commercial berry. However, few outside cutting-edge agricultural research circles have yet to taste or even hear of Haskap. A boreal berry native to the cold and wetlands of Hokkaido, Japan, Kamchatka, Russia and the Kuril Islands, Haskap plants evolved over thousands of years to withstand some pretty extreme environments. Their survival is thanks to thousands of years of evolution that have packed Haskap berries with potent phytochemicals that grant extra defence against cold, UV radiation and pests. Luckily for us, these same compounds have beneficial anti-inflammatory and antioxidant effects when we humans eat them.

Haskap is full of vitamin C and bioactive compounds – often in levels beyond other fruits. They have far more nutrients by weight than blueberries, oranges or strawberries; high levels of antioxidants, anthocyanins, polyphenols and bioflavonoids account for Haskap’s rich colour and complex flavour.

There’s a long history of Haskap use by Indigenous and folk medicine, particularly in northern Japan and Siberia. The name Haskap comes from the Indigenous Ainu people of Hokkaido, who used this berry for its medicinal properties and called it haskappu — “gifts at the end of a branch.” In recognition of its origin as a medicine plant, it is still referred to as the “longevity berry” in Japan. And in Russia, it is known as жимолость (zhimolost), a portmanteau of words meaning “life” and “youth”.

And now, because of its health benefits and amazing taste, Haskap is catching on as a global superfood and is being researched and developed in Canada and the European Union. The varieties we grow, including Aurora, Boreal Beauty, and Indigo Gem, are several times larger and sweeter than wild Haskap, thanks to extensive research at Canadian universities. Years of breeding for selective traits has produced a delicious berry while preserving the high vitamin C and other healthy compounds that made the berry such potent medicine so long ago.

Recent scientific studies published in leading biochemistry and medical journals show an unflagging interest in Haskap’s high nutraceutical and nutritional value, as well as quantifying the potential of the plant — berry, stem, leaves — as a medicinal source.

Nestled in a quiet valley, three fields slope gently towards a hidden stream. In the spring, thousands of young bushes bear pale, fragrant blossoms. In mid-June through the end of July, the valley is awash with a wild and aromatic blackberry-like scent.

Named after the neighbouring Echo Lake Provincial Park, our farm is called Echo Haskap, and we’re working to introduce healthy Haskap products to local and international markets. Our path was set three years ago when we purchased an undeveloped parcel of land in the Okanagan Valley with the vision to transform it and sustainably grow Haskap berries. Today, we are the largest certified-organic Haskap farm in our home province of British Columbia.

In the years to come, we intend to make a name for Echo Haskap as a keystone brand of Haskap innovation. We are working on developing a line of value-added products, including experimenting with different ways of using Haskap, such as freeze-dried powders, syrups, and even dyes.

To realize this vision, we are committed to working with other farmers and in synergy with SARAYA Global Companies, because we know the only way we will all flourish is if we work together.

We look forward to all the exciting things ahead – and invite you to work with us to build a strong international Haskap brand in Canada, the US, Japan and beyond. Through collaboration, we can all benefit from the health and market opportunities of the amazing Haskap Superberry!